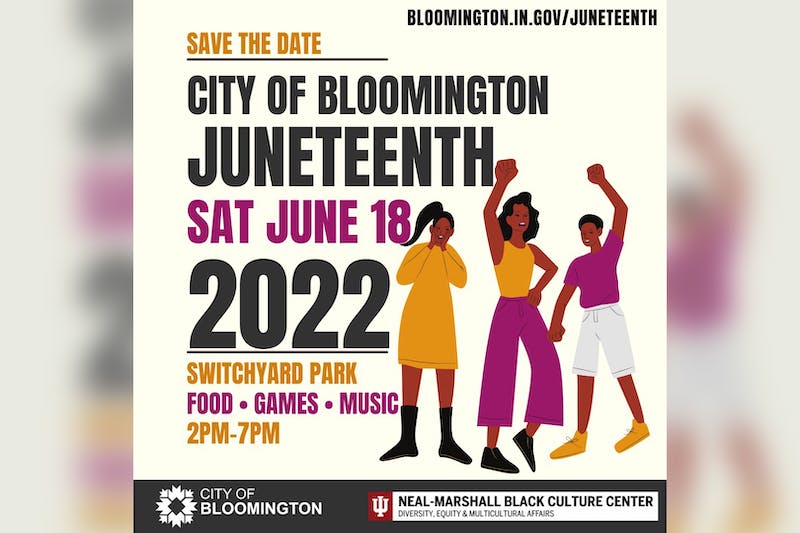 The City of Bloomington will commemorate Juneteenth on June 18 at Switchyard Park. The annual event will allow community members to celebrate the holidays with food and music from 2-7 p.m.

Juneteenth, also known as Freedom Day, Jubilee Day, Liberation Day and Emancipation Day, celebrates the emancipation of those who were enslaved in the United States, according to the City of Bloomington. He is commemorated on the anniversary of the June 19, 1865 announcement by Union Army General Gordon Granger, proclaiming freedom from slavery in Texas.

“With Bloomington being such a short-lived community, and we have so many people from different places, celebrating a holiday like Juneteenth will really help build that community but also educate that community,” said Shatoyia Moss, director of Safe and Civil City. .

The City of Bloomington is partnering with the IU Neal-Marshall Black Culture Center for this year’s event. Carson’s BBQ will provide barbecue dishes including pork, chicken, mac and cheese and more.

There will also be multiple activities and games like the giant Connect Four, card games, dominoes and face painting. Switchyard Park amenities will also be available, including the wading pool and an open park.

In addition, several suppliers and information tables will be present at the event. A full list is available on the City of Bloomington’s event website.

Community members are encouraged to bring chairs and blankets if they prefer to sit on the lawn. People are allowed to bring their own food and soft drinks.

Community members can volunteer at the event. Volunteers will help set up, distribute food, register community members and help clean up. Volunteer registration is available on the City of Bloomington event website.

“We’re definitely taking as many volunteers as we can,” Moss said. “Shifts are reduced so that volunteers can also enjoy the festivities. We want them to be able to sit down, eat, play games and engage in music and everything.

Moss said this event is a great opportunity for community members to come together and celebrate the holiday.