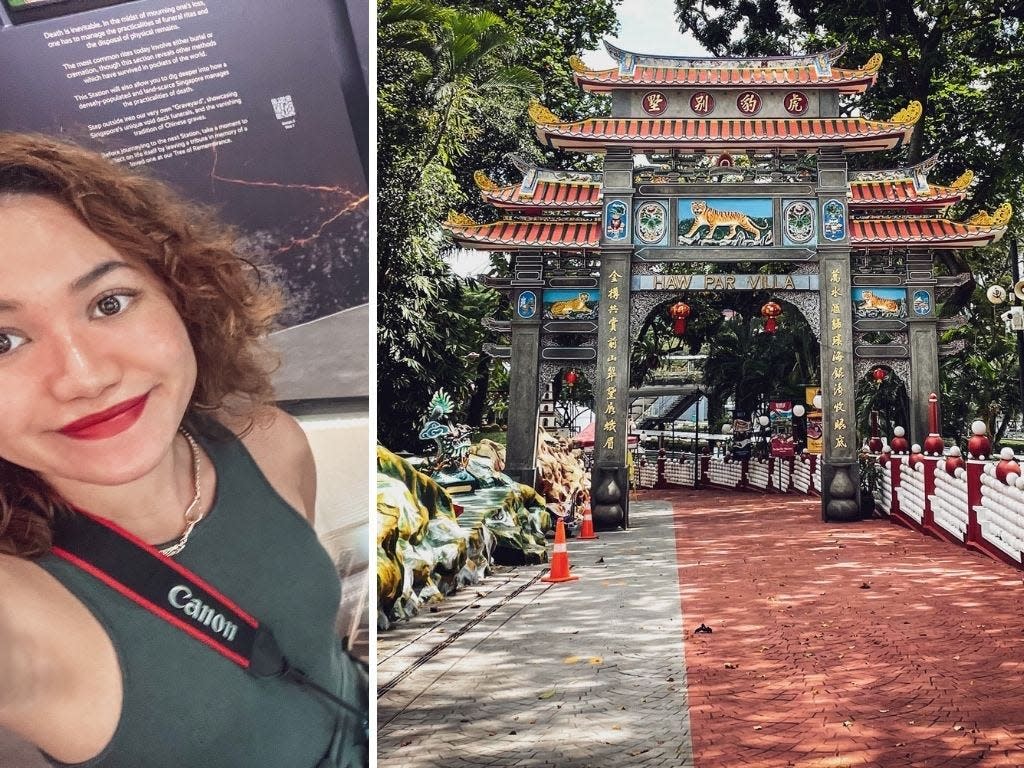 Singapore has a hell-themed park filled with life-size dioramas of demons and tortured sinners. I spent a day there – and it is one of my favorite excursions.

This is Haw Par Villa, Singapore’s most infamous cultural park.

The 3,800 square meter (approximately 40,900 square feet) park is known for its themes of hell, the afterlife, and mythology. It is one of Singapore’s weirdest cultural attractions.

The park was built in 1937 by Chinese-Burmese entrepreneur Aw Boon Haw, who also founded the topical ointment Tiger Balm, according to the government microsite Singapore Infopedia. The park is dedicated to his brother, Aw Boon Par.

While the brothers no longer have ties to the park, with the family donating it to the Singapore Tourism Board, a rep for Tiger Balm told Insider it remains “a part of our heritage history”. .

“No matter what, the Aw brothers – Aw Boon Haw (the gentle tiger) and Aw Boon Par (the gentle leopard) who created Tiger Balm in the 1900s will always be a part of our heritage story,” added the representing.

The Singapore Tourism Board did not respond to my request for comment on Haw Par Villa.

There are over 1,000 statues and 150 life-size dioramas in the park, many of which are inspired by Chinese folklore and legends.

Many of the park’s colorful dioramas were designed to mimic scenes from Chinese literary classics, like the 16th-century novel “Journey to the West.”

While some of the statues depict benign characters like laughing Buddhas, many others are gruesome. Violent scenes are commonplace – a sculpture (pictured above) shows young boys being eaten alive by beasts.

Within the local community, many have said the park is haunted, or at the very least, “scary as hell”.

The museum claims it is the “first museum in the world to explore death and the afterlife”, making it one of Singapore’s most popular dark tourism attractions.

On a recent weekday afternoon, I took a trip to the Singapore theme park from hell.

The park’s infamous “Hell’s Museum” features depictions of what happens in the 10 courtyards of Hell.

The hell-themed museum is air-conditioned, making it a welcome relief from the sweltering Singapore heat. It overlooks Singapore’s PSA Multi-Purpose Terminal (pictured above), a commercial port terminal that facilitates some of the country’s trade.

The entrance to “hell” is elaborate, with a shade to protect visitors from the sun and inset figures around the doors.

In the 10 Courts of Hell, people are punished for a multitude of sins.

The museum features scenes based on Taoist and Buddhist beliefs about how people would be punished in the afterlife.

In Chinese mythology, people have to go through “courts” in the afterlife. The dead are condemned by a king, who condemns them to their specific type of punishment.

There are 10 kings who preside over the courts, and they were first named in a Chinese script in the 8th or 9th century, according to a museum plaque.

Only when sinners have gone through the ten stages of judgment can they be reincarnated.

In the second tribunal, those who practice prostitution are thrown into a “pool of blood” which is overseen by a demon holding a pitchfork (pictured above).

The sculptures are both violent and kitsch – and often on a human scale.

Sinners can be brutally punished for seemingly insignificant things like swearing, wasting food, and “misusing books.”

Here, the fourth tribunal crushes sinners in a large stone for “lack of filial piety”. Filial piety – the act of being faithful to one’s parents – is one of the main values ​​of Chinese philosophy.

One of the most brutal scenes is shown in Court Nine, where a person’s head is cut off for one of these transgressions: robbery, murder, and rape.

Chinese mythology has elaborated several ways for a sinner to be punished for heinous crimes. Rape, for example, is punished by several courts.

The museum was an odd mix of seemingly inconsequential wrongdoing and serious crime, all of which are viciously punished.

At one point during my visit to the museum, I turned to a group of friends who were also exploring the courtyards of hell. I asked them what they were doing with it. One of the women, an experience consultant named Tracy, just shrugged.

“Honestly, I don’t really believe it,” she said. “On the contrary, I can see how it all relates to the park’s heritage.”

I ventured into the park once again that night to see some of the more bizarre dioramas, including a chicken-headed prostitute luring a man into a cave.

The park is open until 8 p.m. every day except Friday and Saturday when it closes at 10 p.m.

Exploring the park after dark was a weird and wonderful experience – the half-human, half-animal statues hidden in the caves look much scarier at night. But it was also oddly peaceful, with no one else around.

The diorama of the chicken-headed prostitute was large: both characters were a head taller than me.

The sprawling park, built on a hill in southern Singapore, has caves that descend below the life-size dioramas.

The artificial caves were painted in a shade of green. Stiff footsteps led me into a dark, shabby cavern, where my footsteps echoed, making me feel like I was in a Hadean fairy tale.

But a ghastly sight awaits you inside the caves – this one was full of sculptures of deformed dogs.

The rest of the cave was bare. After taking a few photos, I walked back up the steps. I know it’s all fake and just for show – but I still didn’t want to be in this alone.

Although the park was visual overload, it is still one of the most fascinating sites I have ever been to.

The park is a weird and wonderful world. I have lived in Singapore for over 20 years and the park is one of my favorite places for a day trip.

It’s also unlike anything else in Singapore, so I’d recommend it to anyone visiting Singapore – or anyone looking for a new adventure in an otherwise sparkling and modernized city.