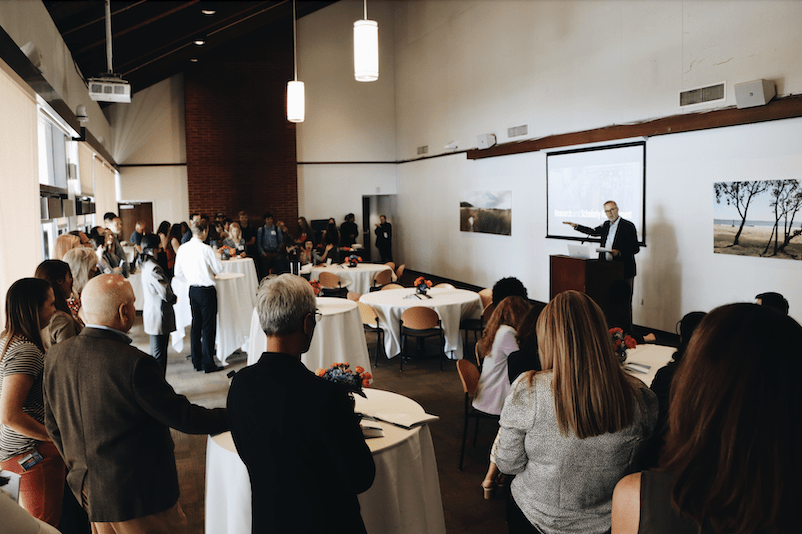 Students and staff gather in the Fireside Room for the opening reception for the 2022 Seaver Research Symposium. Vice Provost Lee Kats said the event has grown from a group of 10 student attendees in 2006 to more 150 this year. Photo by Sammie Wuensche

On March 25, dozens of seats in the Fireside Room filled with students and faculty dressed in their finest professional attire to kick off an annual series of events celebrating research and honoring students who spend months – and for some, years – on their projects.

The Seaver College Research and Scholarly Achievement Symposium is a 16-year tradition that has attracted over 150 student participants. Associate Vice-President for Research Katy Carr said the symposium empowers student researchers and draws attention to the work they do with faculty mentors.

“In the research project process — there are so many essentials depending on your specific discipline or project — but one of the most essential that people sometimes don’t think about is dissemination,” Carr said. “You have to have a place to share it. So it was supposed to give that opportunity.

The Provost’s Office sponsored the symposium and welcomed the Pepperdine community to the conference-style research event with a formal opening ceremony. Carr said that students working in research programs at the University and alone participate in the symposium, along with the participation of creative and performing artists.

Seaver Dean Michael Feltner was the keynote speaker at the ceremony, offering remarks on his hopes for the symposium and his goals for attendees.

“I know each of you in the room is committed to scholarship, and it takes perseverance and sacrifice, and all of the information can be tedious, accurate, and incredibly frustrating,” Feltner said. “But that’s not the most fun part. This is the part that leads to fun because we have a discovery and we put the puzzle together.

Vice Provost Lee Kats said he and his office were impressed with the high turnout given the return to in-person teaching this year.

“I was worried it would be a third or half of what we used to get, but it’s about in line with our best turnouts in the past,” Kats said.

To engage students who may not be aware of on-campus research opportunities, business director Nicolle Taylor said she placed the art and poster sessions — which took take place at 2 p.m. after the opening ceremony – at the Waves Café. Taylor wanted to grab people’s attention and encourage them to learn more about the topics their peers are passionate about, which could motivate new research in the future, she said.

Taylor said students aren’t the only ones she hopes will be inspired by the symposium.

“It’s to remind all of us teachers what our job does,” Taylor said. “It’s up to us to be able to see what all of this work is leading to through the success of our students,” Taylor said.

For the research of Elizabeth Chang, a young chemistry student, she created an improved microwave oven that preserved the starting ingredients of the scientific compounds she was studying. Chang said in his eyes, the symposium is a day of exploration.

“It’s really cool to see what other people are doing, especially people outside of your department,” Chang said. “Sometimes I feel like I’m in a little science bubble.”

With research studying the growth of alternate generations of ferns, senior Tristan Furlong said most of all he treasured the support he received from his mentor, biology professor Donna Nofziger.

Second-year art minor Stella Engel said she has been working on drawing observational portraits with her faculty mentor Yvette Gellis since the start of the 2021-22 academic year. Engel said the symposium was the perfect time to exhibit his work.

“I was interested in doing a showcase as a senior showcasing all my stuff, but I can’t because I’m [an Art] minor, so it was great to have this opportunity,” said Engel. “I think it draws attention to artists because we don’t do a lot of shows like this, and if we do, they’re usually a lot smaller.”

The music component of the symposium began at 3:15 p.m. and music teacher Ryan Board hosted the Raitt Recital Hall. The artists based their performances on research they did on composers, Carr said, and the goal was to draw attention to unconventional forms of research.

“When you think of research, people think of labs with petri dishes — I mean, I’ve definitely thought about that,” Carr said. “There’s this more traditional view, but it actually sounds different when you’re talking about the performing arts or the creative arts.”

Senior Madalen Carerra – who has a double major in political science and sociology – gave an oral presentation of her research in Black Family Plaza classrooms at 3:15 p.m.

Carerra said an internship at the Department of State for the Bureau of Narcotics and Law Enforcement in the Caribbean region in the spring of 2021 inspired his research.

“I was noticing a lot of research gaps that immigration statistics could fill,” Carrera said. “A lot of the policies they were implementing in those countries, I felt like I could help them make decisions, so I decided I wanted to start researching immigration in the Caribbean.”

After all her hard work, Carerra said she was thrilled to finally be able to exhibit her research.

All student research receives invitations to participate in the annual symposium, Kats said, and Seaver is proud to provide them with a platform to share it.

“There’s a lot of hard work that goes into the scholarly and creative endeavors of the academy,” Kats said. “Today is just a day we try to celebrate at Seaver College.”

Minneapolis’ only parks color commissioner stands up for disenfranchised people