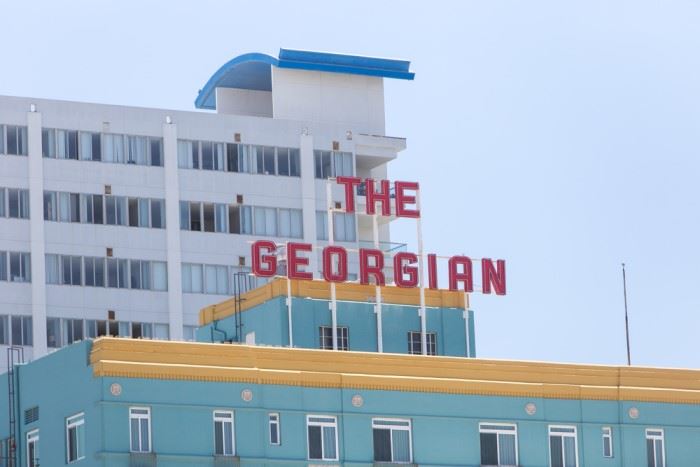 BLVD Hospitality, in partnership with ESI Ventures, has revealed plans to relaunch Santa Barbara’s iconic The Georgian hotel next year. BLVD acquired the historic hotel in August 2020 with the intention of restoring it to its former glory.

Located on Ocean Avenue above the Santa Monica waterfront, The Georgian has been an integral part of the Southern California coast since its opening in 1933, one of the first skyscrapers ever built in the area. Over its many years of operation it has hosted a number of celebrity guests including Charlie Chaplin, Clark Gable, Marilyn Monroe and Rose Kennedy.

“I had walked past The Georgian several times before setting foot in this architecturally stunning property for the first time 13 years ago,” said Jonathan Blanchard, Founder and CEO of BLVD. “I could see The Georgian had such a striking presence and charm, she just needed to be brought back to her full potential.”

The next chapter of The Georgian will see a restoration of all 84 rooms and 28 suites, as well as new and refreshed offerings including the Sunset Terrace, Dining Room and Sunset Bar with ocean views. The hotel will also house two private meeting and dining spaces, The Gallery and The Writer’s Room. The gallery will present a variety of works by international artists on a quarterly basis.

The project is approached more as a historically inspired restoration than an overhaul and will revive and reinvigorate “the iconicity that emanated from its doors in the 1930s and subsequent decades.”

The refreshed concept will retain much of the hotel’s original details, while new materials and an elaborate artistic program will combine to create a series of spaces to bring a new chapter to The Georgian. Touches include fully custom Art Deco furnishings, ornate lighting, imported Italian marble, and the Sunset Bar’s Havana Deco-inspired floor pattern.

“The story of the First Lady of Santa Monica is filled with magic, intrigue, sophistication and most definitely a touch of debauchery,” said Nicolo Rusconi, co-founder and president of BLVD. “Our vision is that each of these elements will merge with contemporary California culture to once again be the crown jewel of Georgian California.”

The Friday Flyer | CLAMS eat, dance at Country in the Park event