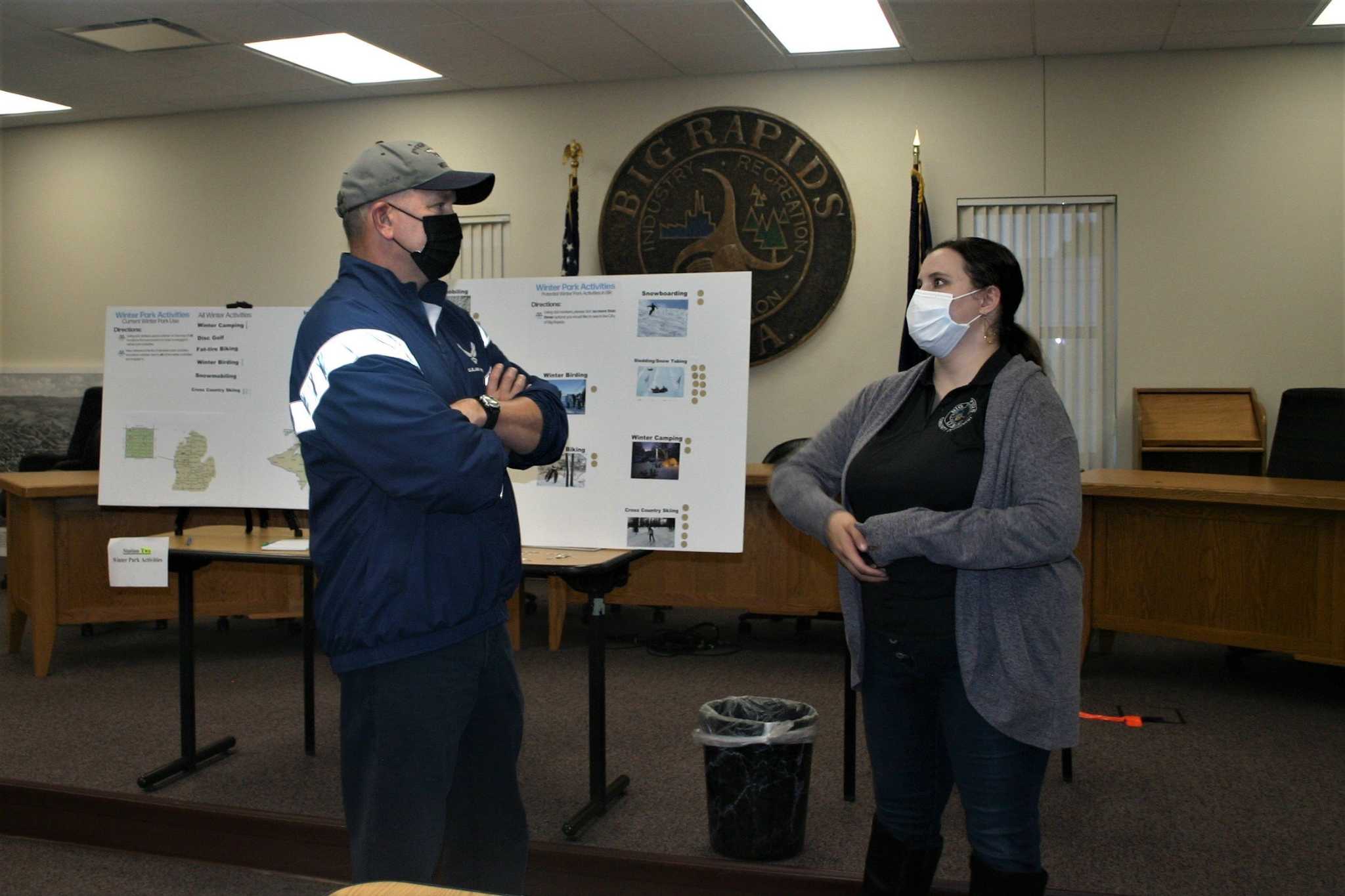 Residents give their thoughts on park improvements at a workshop

BIG RAPIDS – Residents of Big Rapids were asked to share their thoughts on future projects in the Parks and Recreation Department’s master plan during an up-and-coming workshop at City Hall this week.

Planning and zoning technician Emily Szymanski, who led the workshop, said the purpose of the workshop was to allow residents to learn about different aspects of the park plan and provide input.

“We hope to get information and develop a plan that represents what people want to see and how they use our parks,” Community Development Director Paula Priebe previously said.

Some of the projects being considered include a permanent pavilion for the farmer’s market, a skate park, the development of the property at the White Pine Trail, and additional amenities to the existing park facilities.

During the workshop, the participants went from station to station to give their opinion on the various initiatives of the project.

At one station, attendees were asked to rank their priorities for the development of the repository property. The property has been divided into three separate sections with project ideas for each section presented.

The first section included a skate park, a native plant area, a lodge with seating and a dog park; section two consisted of community homes, public washrooms and a community garden; and the third section offered public toilets, a sculpture park and a playground.

At another station, participants were asked to rank their priorities for park improvements using BR Bucks to â€œbuyâ€ the improvements they would like to see.

A winter park activity station asked participants to place a colored dot next to the activities they would most like to see in the city. Activities include snowmobiling, ice skating, snowshoeing, cross country skiing, sledding, snowboarding, fat tire biking, disc golf, winter bird watching and winter camping .

Other stations ask attendees to share how they use parks, how often they use them, and their favorite things about parks.

A concept plan for the future farmer’s market pavilion and ice rink indicated that the project is expected to cost more than $ 3 million.

Building a skate park could cost between $ 20,000 and $ 300,000, depending on the complexity of the park, depending on the information provided. Participants were asked to rank where they prefer to build a skate park – Hemlock Park, the Depot Trailhead or Northend Riverside Park, and rank the equipment they would like to include from several concept photos.

Northend Riverside Park improvement plans, for the construction of a permanent toilet, which will include the addition of a well, septic tank, bathroom and security, are expected to cost more than $ 200 $ 000.

The Riverwalk Phase 4 construction project, which would include a pedestrian bridge over the Muskegon River and additional walking trails along the river near River Street Park, is estimated to be over $ 2 million.

A community-wide survey recently conducted by the Parks and Recreation Department regarding the park amenities that residents would like to see will also be considered when determining future park plans.

Other initiatives of interest to respondents included the washroom at Northend Riverside Park, the Riverwalk Phase 4 development, and the trailhead development near the depot.

Once the draft plan is developed, there will be a public hearing to get additional community feedback on the proposed plan, she said.