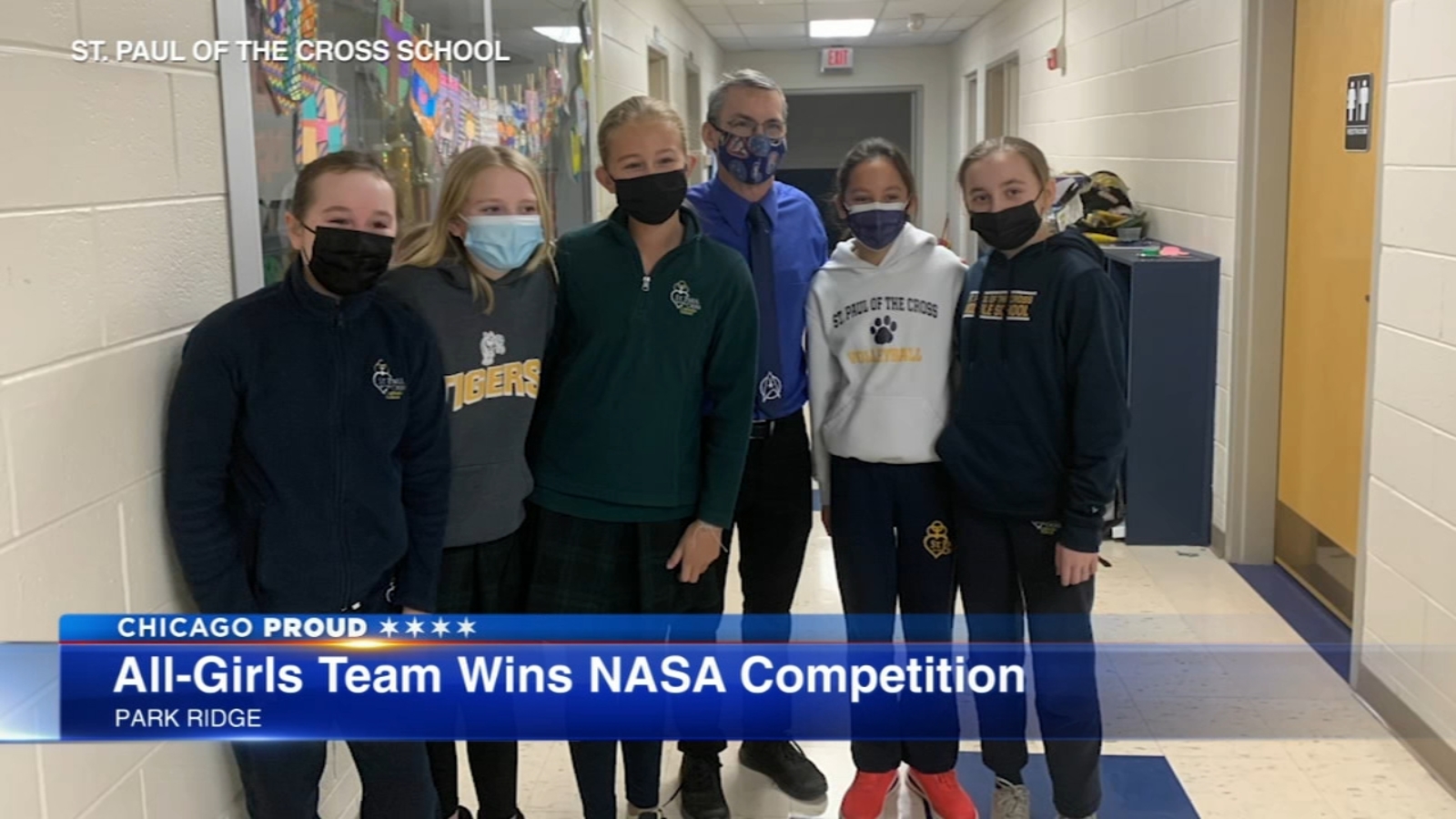 At least that was the case for five 6th graders at St. Paul of the Cross School in Park Ridge.

The all-female team designed an alligator-shaped space junk collector, complete with magnetic teeth to gnaw through space junk. The project was among the winners of a national NASA competition.

“We didn’t think we would win,” said team member Renata McCoy, 11. “We thought we had no chance. … The whole class went crazy. We were in shock.”

The win comes with $1,500 project funding for the girls and a space ticket for the space junk collector they will build.

The girls’ project was among 57 winners chosen from nearly 600 entries and the only selection from Illinois. The competition was open to middle and high school students; the Park Ridge girls were among the youngest winners.

NASA announced the results Jan. 21 on a live stream as the entire school watched.

Renata said she’s normally more into musicals and art than science and math – but her creative background helped her come up with the idea for the alligator-shaped craft.

“We just wanted to make it more creative, since we’re young,” she said.

The standout project is set to be on a UP Aerospace rocket launched from a site in New Mexico in the spring of 2023.

The students came up with the idea of ​​collecting trash in space themselves after learning about the dangers of orbiting debris in their STEAM (science, technology, engineering, art, and math) class.

“They’re kind of like bullets in space, which could hurt any equipment sent by NASA or even hurt astronauts,” said Karl Ochsner, a STEAM teacher at the school.

NASA tracks about 27,000 pieces of space junk, usually pieces of broken old satellites and space stations. There are about 100 million more pieces of debris that are too small – the size of a marble or less – to track. Space debris can travel at speeds in excess of 15,000 miles per hour.

“If space junk isn’t collected in space, it will look like an obstacle course for astronauts,” said Mary Anne Gleason, 11, another member of the St. Paul team. “It’s going really fast, fast enough to kill you. … We wanted to think of something that could actually help people, and it helps space look cleaner. It helps astronauts. There are so many differences that it can To do.”

The girls designed the prototype in two months, Ochsner said. The final version, produced on a 3D printer, will include a rotating electromagnet, a system to release waste and a camera – all contained in a small box that should weigh less than 1.1 pounds. The collector must also be programmed to communicate with the rocket to indicate when it is far enough from Earth to operate.

“In science, we learn Newton’s three laws of gravity, and they remember them to pass a test,” Ochsner said. “But when they apply it and build it, that’s where the real learning comes in. It’s something meaningful to them.”

The girls will meet with a NASA engineer every two weeks to help develop their prototype.

“It’s a lot of work, but I know it will be worth it when it launches into space,” said Mary Anne.

Last week, the girls were honored at a special school mass, where they received a starter kit from NASA, including electronic controls and a 3D-printed polycarbonate box in which their completed project will go into the world. space.

Win or lose, Ochsner said, his students would have gotten a lot out of the competition.

“I told them that just creating a proposal for NASA is a great experience for them that they can use when applying for high schools and even universities, saying, ‘I made a proposal to NASA,'” Ochsner said. “But now that they’ve won and they have something going up in space…for any nomination you can mention that.”