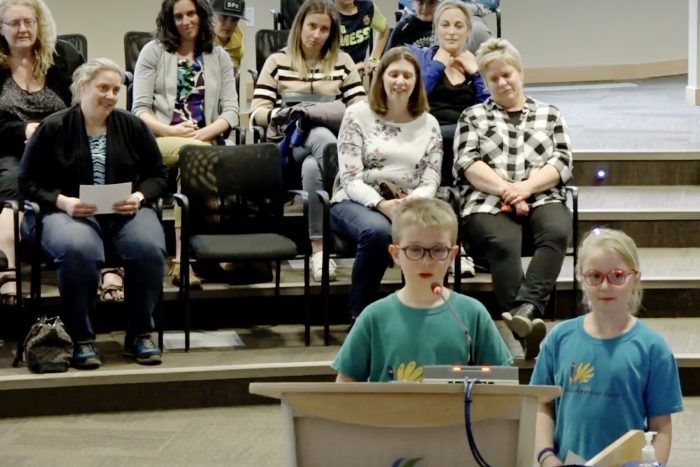 Local and regional Francophone families are taking another step toward a new K-12 school in Sherwood Park.

At the regular council meeting on Tuesday, May 17, Strathcona County Council approved the rezoning of portions of Florian Park in Ward 8 to allow for the construction of a replacement school for École Claudette-et -Denis-Tardif.

The importance of finally having a French-language school in the area was not lost on the school staff, students and parents who filled the council chamber.

“I love my school. It’s like a big family to me and my friends. My mom and many other parents have worked so hard to find us a new school. We’re so excited to finally be on our way to school. ‘to have this school with a real gymnasium, a music room and a library that’s not in the hallway,’ Kacie Thorson, a 4th grade student at École Claudette-et-Denis-Tardif, told the council. We want to be like the other students and not have to dress in our outerwear and walk to the nearby school gym.”

Recently, the French school in MacGyver had a library with books lined up on shelves all across the hallway because the library was absorbed into the classroom space to accommodate more students. The modular school also had an agreement with New Horizons to use its gym as it did not have its own.

“This school does not meet our needs. We deserve to learn in a way that all other kids learn,” said 5th grader Ricky Adamsky. “We are unique, and I think this rezoning needs to happen.”

Since 1991, Florian Park—located west of Regency Drive and south of Foxboro Drive—has been pinned down as a future school site. Last year, the school was one of 14 schools in the province funded under the province’s 2021 capital plan, and things quickly fell apart with the county to find a location.

As shown on the county rezoning map, the school was not positioned at the far north end of the park due to an existing underground pipeline. The beloved fire truck playground will be moved to Florian Park, and the school will build another playground with additional provincial funding of $250,000.

Two concerns were raised at Tuesday’s open house, including the potential risk of children drowning in the stormwater management pond and traffic jams. Rather than seeing it as a risk, school principal Michel Lapointe said the pond will be incorporated into the school curriculum and students will be supervised at all times when outside. . An internal pick-up area will be included in the school design and Lapointe confirmed that over 80% of students are bussed.

“These are kids who have given up so much and fought so hard, all they want is a school with a gym – it’s kind of sad if you think about it like that,” said said mother-of-two Melaine Adamskym, who added her. son cried when he lost his library in the classroom. “This rezoning will allow this school to be built and these children to finally have what all the other children in Sherwood Park have.”

Tanya Saumure, a school parent and president of the Center-Nord School Board, told the board that she has lived in Strathcona County for nearly 30 years and has never had the opportunity to be educated. in their mother tongue within the community. Like her, her eldest daughter is currently bused to Edmonton for school, 15 hours a week, but there is hope that her youngest child will go to school in the park.

“The catchment area of ​​this school expands significantly to include neighboring counties and provides access to French-language education, which is a constitutional right,” Saumure said. “We have the opportunity for every child in Strathcona County and beyond to be educated in the language of their choice here in Strathcona County.”

Under section 23 of the Canadian Charter of Rights and Freedoms, to attend a French-language school, you must have a parent, grandparent or sibling who was educated in French in Canada.

Advocating for rezoning, Ward 8 Coun. Katie Berghofer highlighted the benefits of French culture to the community, the added amenities of the park, and the county’s growing relationship with a third school board.

Currently operating out of its temporary home at 10 Hawkins Crescent, Ward 1 Coun. Robert Parks said the school’s location was less than ideal in Westboro, and while he will miss the school for being great neighbors in Ward 1, he wished the students and staff the best. .

“This new location will be a much better home for the school,” Parks said.

The council passed three readings of the rezoning on Tuesday with an 8-0 vote. District 2 Com. Dave Anderson was absent.

“I’ve been impressed to see this school community grow over the past six or seven years to the point where it’s packed and looking to add grades. It’s wonderful that they bring their children home to attend high school here,” Ward 4 Coun. said Bill Tonita. “For any parent, it’s really comforting to know that you no longer have to send them to town, they will be here in Sherwood Park. I am glad you are able to achieve this.

Expected to serve between 400-450 students from Sherwood Park, Fort Saskatchewan, Lamont, Josephburg, Ardrossan, Camrose, Tofield and surrounding areas, school estimated to be at full capacity by 2028-29, but two modules may be added on site to resolve some of this pressure.

Last fall, it was revealed that this school will be built under a provincial public-private partnership (P3) model, which surprised the school board and was not favored by them as they would like to own the building. , however, there was no update. provided on this subject on Tuesday.

A construction date has yet to be announced.