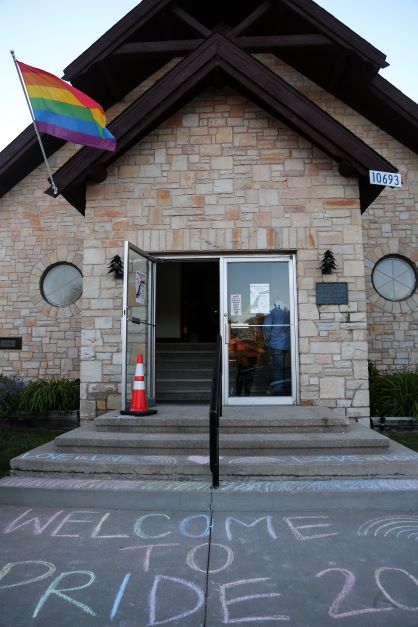 The Sister Bay Village Hall, built in 1941, hosts approximately seven events each year, including the first two editions of Northern Door Pride. The village plan commission said the building’s time as a useful structure on valuable village land was over. Photo of Myles Dannhausen Jr.

The Sister Bay Village Hall has been a landmark at the center of the village waterfront for 81 years, but that may soon be over.

The village plan commission discussed the building’s future at its July meeting and reached a consensus that the hall, built in 1941 at a cost of $10,000, should go. It is not the first time the fate of the ward has been discussed, but new village administrator Julie Schmelzer, who has been in the post for two months, said she has already realized the myriad of problems with the building.

“It has sentimental value, but not historical value,” she said. “It’s not that old, but it’s in bad shape.”

The village has investigated renovating the building in the past, but Denise Bhirdo, village administrator and member of the planning commission, said that in the end it became very expensive without getting value for money.

“I’m not okay with spending a dime to revamp it in any way,” said Village Commissioner and Chairman Rob Zoschke.

What replaces the room is another question. The village has already opened up almost the entire waterfront, so more green space in this area is not the highest priority, the commissioners said. Schmelzer suggested the spot would make an excellent location for a visitor center or a small waterfront museum.

“Let’s have something we’re so proud of there,” she said.

She and village administrator and planning commission member Nate Bell suggested a building with lots of glass and windows facing the waterfront. Bhirdo wondered if there would be a creative way to reuse the hall stone by incorporating it into the building or other structure.

Louise Howson, coordinator of the Sister Bay Advancement Association, hosted several events in space during her tenure, but she agreed with the plan commission’s assessment.

“The thing about the party hall is that it’s beloved, but no one goes there,” Howson said.

The hall hosts about seven events a year, she said, and it has a limited capacity, which isn’t suitable for most large community gatherings. For events that use the facility, numerous issues make it less than ideal: the basement has flooded several times; the elevator does not always work for people with reduced mobility; and although the building is located on the waterfront, there are no waterside windows to take advantage of the location.

“The question is, is this the best, the right use of the best property in the village?” Howson asked. “I suggest it be torn down, so everyone can hate me.”

The town hall discussion also sparked discussions about the future of the post office next door. The village investigated moving the post office in 2008 when it began to revamp the waterfront, but ultimately decided against it.

In February, the ad hoc land acquisition committee discussed the possibility of moving the post office to the property the village acquired near the sports complex as part of a larger plan to relocate administrative facilities and of the park on this property. Postmaster Emeil Marks has indicated the post office may agree to the move now, in part because increased use of the waterfront has created traffic and parking issues for the post office.

The hope is that moving the post office would reduce some traffic congestion, Bell said.

The planning commission reached a consensus that the hall was not worth an investment, but it has not yet defined the next steps for the project.