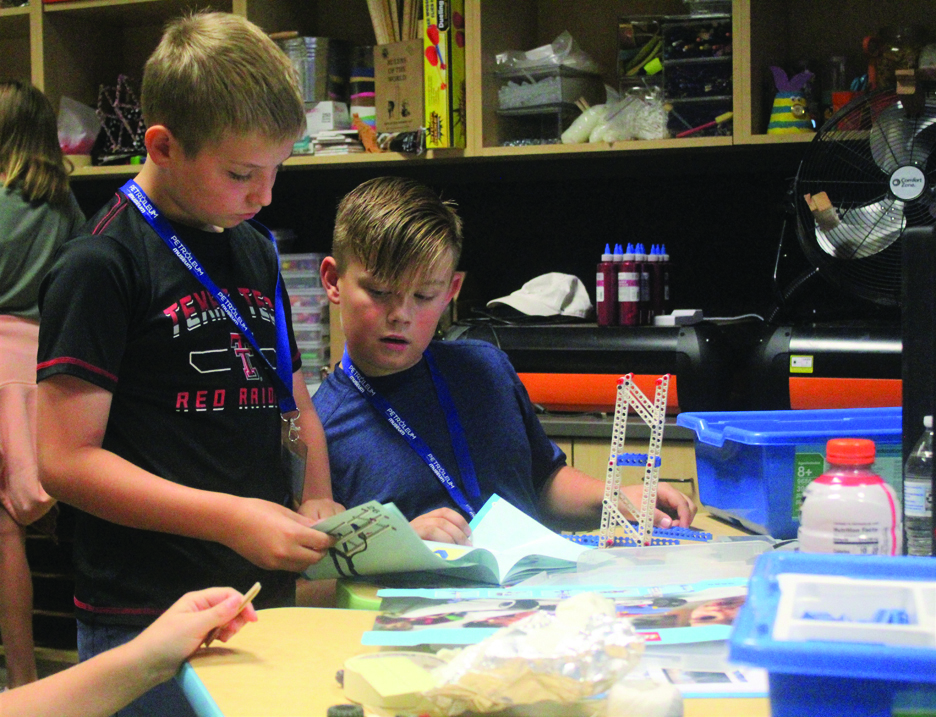 MIDLAND Carter West, 9, is one of many kids who loves building things with Legos.

He hopes to use this passion to one day become a master builder.

West is one of many students who have attended the Lego Mini Masters: Shakin’ City Summer Camp currently taking place this week at the Petroleum Museum in Midland.

“I love this camp because I love Legos,” West said. “I love creating things with my mind.”

The camp, which is for children ages 8 to 12, began Monday and will end Thursday.

This is one of many educational camps the museum offers during the summer months.

During camp, children learn to construct buildings and other structures such as bridges that can withstand natural disasters like earthquakes and tornadoes.

“We have different engineering projects set up throughout the camp that focus on natural disasters or weather conditions that we talk about like tornadoes,” Petroleum Museum director of education and marketing Mara Bland said.

On Monday, the children worked on earthquakes to build Lego structures that could withstand an earthquake simulator.

On Wednesday, Bland says kids will build bridges with Legos before breaking them. Similar activities will take place on the last day of camp Thursday.

“There’s going to be some engineering activity with our manufacturing carts using a break bridge, so the way the bridges are designed, instead of completely collapsing, they collapse,” Bland said. “That will end the rest of the week.”

On Tuesday, the children worked on structures that could withstand a tornado.

Bland says each day is split into two sets of stations where, depending on the topic they’re covering, kids will try to have an engineering project and build something they can take home.

“We provide brainstorming sheets for them to work through the engineering design process,” Bland said. “Then they test and retest their structures throughout the morning.”

Anya Furtado, 9, is another camp participant.

“It’s super fun to come here,” Furtado said of the camp. “It’s one of my favorite places.”

His favorite part of camp is experimenting and making things.

“I usually do the biggest engineering projects in the class,” Furtado said.

The camps are educational, and Bland says the kids love playing with Legos.

“They love Legos,” Bland said. “That’s probably the biggest hit. … The bridges will probably be the biggest thing they’ll build because they have to be two feet long and they have to raise and build an actual bridge structure, so they have to choose one of the existing structures and replicate it.

Other camps the museum held throughout the summer included Rockin Rockets, which was aimed at children ages 6 to 8, where students explored geodes and basic samples, as well as creating rockets and more.

Lego Robotics, also aimed at children aged 6 to 8, engaged students in exploring the world of coding and science as well as technology, engineering and math through skill-building activities. team, using Lego robotic equipment.

There was also Wild about Science (ages 6-8) which allowed children to learn about animal classifications, adaptations, ecosystems and more.

“All of our camps have different topics,” Bland said. “It depends… they’re all very STEM-based, so we’re trying to focus on the engineering-based process. We provide additional information and any records they take home. But we’re really working to spark that curiosity and interest in science and STEM and helping them understand that they can do whatever they think and we’re working through that whole process of understanding having a problem and to have a solution without having a step by step guide to do it.

As summer draws to a close, Bland says the museum will be offering other camps in the fall, including robot building classes.

City of Buda hosts Tennessee Whiskey at Arts in the Park