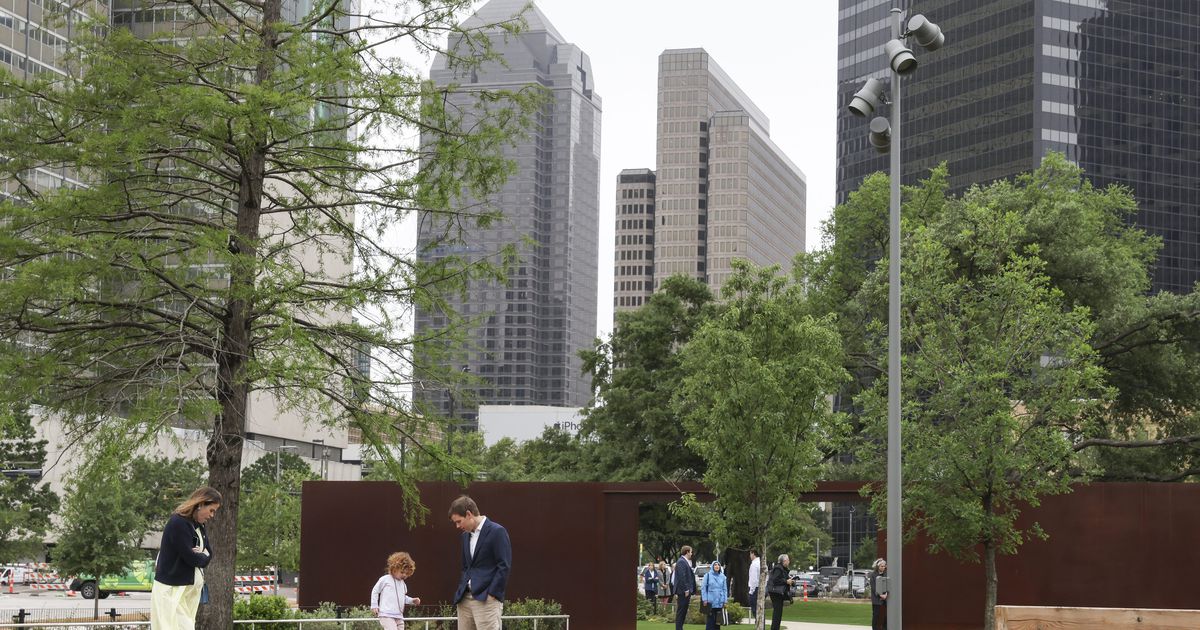 Carpenter Park must have rolled green eyes when early forecasts suggested a thunderstorm or two could wash away its opening ceremony on Tuesday as downtown Dallas’ largest green space.

On this day, the 5.75 acres of bad luck and hardship – and the humans behind the exhausting and arduous reinvention – took a break from that rainy week.

Yes, it was wet and cold, but the only showers came when the park’s play fountain kicked into action after Mayor Eric Johnson declared Carpenter Park officially open.

Johnson described Carpenter as “almost six acres of parkland that we’ve, frankly, wanted to exist…a testament to that optimism, that ingenuity, and that indomitable spirit that drives the people of this great city.”

This now grand park is a story of patience, bravery and courage. It’s a wonder that – over the course of three city managers and three park department heads – Parks for Downtown Dallas hasn’t just given up.

Carpenter Park’s progress was stymied for more than a decade by street reconstruction and debate over the future of Interstate 345 and DART alignments. Then came the discovery that a giant mass of spaghetti-like power lines under the park had to be separated and moved, one by one.

As everyone prepared to exhale, the fiber company contractor removing the last line hit a water main, which flooded the south end of the park and created a 20-foot sinkhole that destroyed a traffic light on Cesar Chavez Boulevard and Pacific Avenue.

Just Friday morning, a huge hive of bees swarmed over one of the park’s approximately 150 trees and had to be carefully removed.

“It took a lot of people to get us here today,” said Amy Meadows, President and CEO of Parks for Downtown Dallas, as she greeted the crowds on Tuesday for the opening of the third of four green spaces. that the nonprofit foundation builds through its public-private partnership with the Dallas Park and Recreation Department.

Now that the talk is behind us, it’s time for the real fun to begin. To get started, check out the opening week event list at the end of this column.

The size of the park allows for all sorts of experiences: open, shaded lawns and walking paths, an interactive dancing fountain, and a children’s play area. A dog park, basketball court, clubhouse, and space for food trucks are located under the southbound elevated lanes of I-345.

As for the ongoing debate over removing I-345, the park design takes this possibility into account.

“I hope everyone will experience it after dark as well as during the day,” Meadows said. “Especially for the magic lighting under the highway and the bird’s nest effect of the fountain.”

The park is a reimagined and dramatically expanded green space of what was originally John W. Carpenter Plaza, dedicated more than 40 years ago to honor the legendary Dallas businessman who shaped the future utilities and steel in Texas and established the Southland Life Insurance Co.

The centerpiece of the new park is the 700-foot-long Corten steel sculpture by contemporary artist Robert Irwin Portal Park Slice.

Irwin created the original piece, Portal Park Piece (Slice), for the opening of Carpenter Plaza in 1981 and the sculpture has long been cited as Irwin’s consequent work among his minimalist, site-specific installations.

This early sculpture sat in an ornamental green space trapped among suburban roads. In Quin Mathews’ new documentary The gate and the parkIrwin, 94, says people probably didn’t even see him “when they were speeding around in their cars”.

The artist’s new vision called for the sculpture to be rotated 90 degrees clockwise so that it now crosses the park from east to west.

Among the coolest moments in the 10-minute documentary is the story of how Irwin meticulously drew his proposed revisions, including sketches of delicate filigree leaf pattern additions, then rolled them up and sent them – in a box of Chanel No. 5 perfume – to Carpenter Park. designers.

Mary Margaret Jones, of landscape architects Hargreaves Jones Associates, led the powerful mix of green space and art in Carpenter Park. The same firm is the author of the downtown parks master plan of 2004 and its update in 2013.

Parks for Downtown Dallas oversaw the creation of three other green spaces resulting from these plans: Pacific Plaza, which opened in October 2019; West End Square in March 2021, and Harwood Park, which is due to open next year.

A precursor to the foundation opened Civic Garden, originally Belo Garden, in 2012.

Once completed, each park is owned and operated by the city.

Private donors and Parks for Downtown Dallas contributed $4.7 million in development costs for the $20.1 million Carpenter Park and the Park Department contributed $15.4 million in approved 2017 bond dollars by Dallas residents.

John Carpenter III and his wife, Cele, made the lead donation of $3 million to help transform his grandfather’s namesake spot.

“None of this would happen without the Carpenter family, four generations of committed and civic men and women,” said Robert Decherd, founder of Parks for Downtown Dallas and president and CEO of DallasNews Corporation, at the ceremony. opening. .

That’s why it’s so fitting, Decherd continued, that the bronze statue of John W. Carpenter, sculpted by Robert Berks, is now positioned at the corner of Live Oak and Pearl streets to welcome visitors to the park.

The family’s roots in North Texas go back to Carpenter who established his Hackberry Creek Ranch, overlooking the bottoms of the Trinity River, a century ago. John’s son Ben later developed this spread into what is now Las Colinas.

What emerges from Decherd is that while the family is happy with Carpenter Park, they are more committed to supporting the greenspace system as a whole.

“For them, it’s about creating a great system of urban neighborhood parks downtown,” Decherd told me.

For Laura, Jean III’s sister, the Tuesday opening was a moment of closure. It was there when Irwin’s sculpture was originally installed and, as Decherd noted, “is truly dedicated to the park and to this work of art”.

Among the donors who have stepped up specifically for the Carpenter Park project is the Howard Earl Rachofsky Foundation, which created a $300,000 endowment to Parks for Downtown Dallas to maintain Portal Park Slice.

This is invaluable support for the flagship piece, given that the city’s annual budget only provides about $160,000 for the upkeep of its entire 300-piece public art collection.

Jennifer Scripps, president and CEO of Dallas Downtown Inc., encouraged guests on Tuesday to look around at the opportunities surrounding the newly opened green space.

“Carpenter Park will be a vital stimulus for new development, help fill in some of these parking lots, and help make connections to Deep Ellum and our other vibrant neighborhoods to the east,” Scripps said.

Decherd, who has been involved in planning and design issues in the heart of the city for 40 years, sees Carpenter Park as an assemblage of the green space goals of the 2004 master plan and the Inside the Loop transportation plan made in around the same time to try to clear traffic tangles and then winding North Central Expressway road to downtown

“The long gestation period for this park was due to the need to reconfigure the entire area on the east side of downtown,” he said before the opening. “The result is a truly excellent park.”

Landscape architect Mary Margaret Jones told the Tuesday crowd that our city has done what other cities are only just beginning to think about when it comes to green space.

“Dallas made a plan and then they did it,” Jones said. “Other cities look at Dallas and go ‘wow’.”

7:30 p.m. Friday: Music on the Mound with Rob Holbert Group