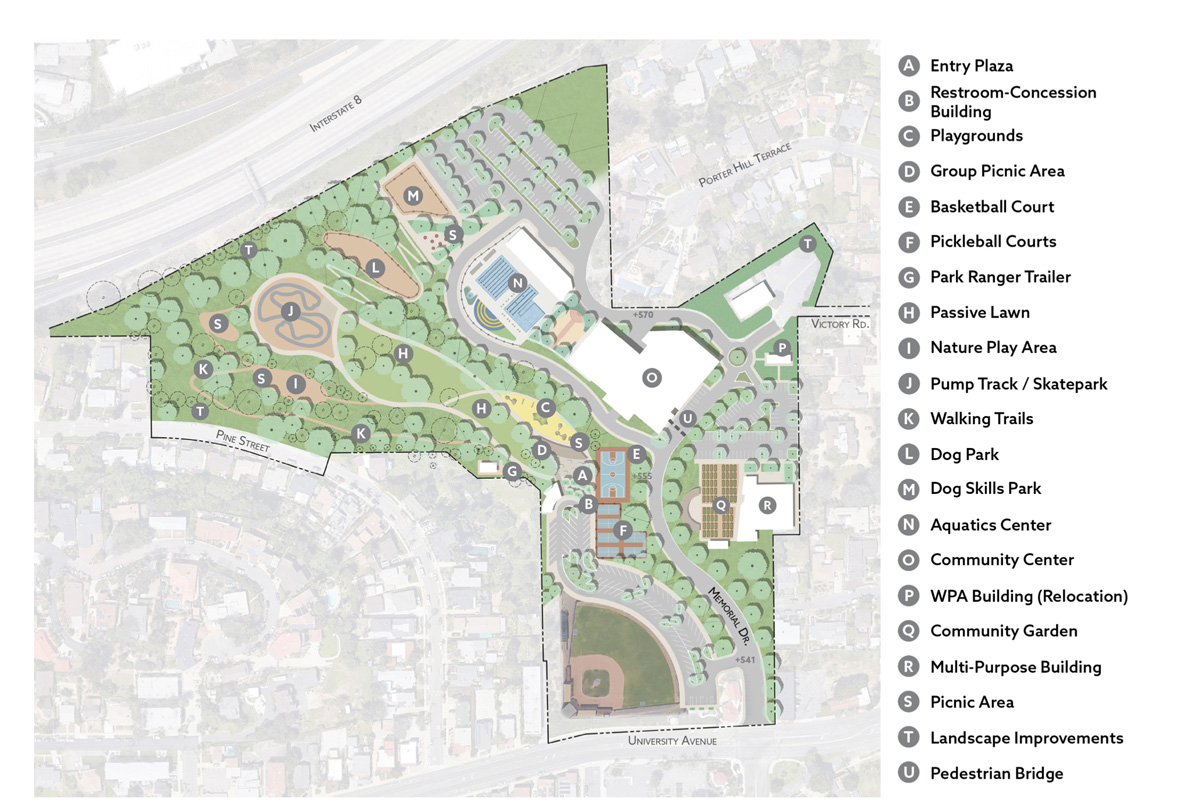 The city of La Mesa is calling for final feedback from residents on a MacArthur Park redesign priced between $73 million and $77 million by Jan. 30.

The park’s redesign dates back to 2017, when City Council directed staff to reallocate a nine-acre golf course located within the park at 4975 Memorial Drive to be included in the future redevelopment of the entire 22-acre park.

Since then, the city, together with KTU & A Planning and Landscape Architecture, has developed options on how to proceed with the complete overhaul of the park, mainly based on the expansion of green spaces, the improvement of facilities and the replacement of the park’s municipal swimming pool.

Throughout the planning process, the city received feedback from the community during public meetings and inquiries that have indicated that existing facilities, including the municipal swimming pool and recreation center dating from around 1950, are inadequate for the needs of a growing community, said the director of community services of La Mesa, Sue Richardson.

“The current pool does not have enough space for our popular learn-to-swim or adult swim programs; the community center is frequently requested for large banquets and events with over 275 people, but the facility does not have the space to accommodate this, so community members must step out of La Mesa to hold their celebrations . The city does not have a community-use gymnasium,” Richardson said.

Based on analysis of an initial Opportunities and Constraints Study, City Council directed staff to explore the possibility of constructing replacement facilities to meet La Mesa’s current and future needs for the plan. director, Richardson said.

The proposed design was developed by conceptualizing where park amenities would best be placed within the existing park topography.

“The center and west side of the park are preserved as open space to balance out the more active areas. Features such as pickleball, a bike pump track and playground with a hillside slide and universal accessibility design commonly included in new parks are being built, in addition to more traditional features said Richardson.

The redesigned community center is expected to sit above a parking garage to preserve more green space in the park. Recreation programs that currently meet outside of the adult enrichment center would move to the new community center.

Additionally, certain features such as the proposed lighting were prompted by increased use of the park at all hours during the pandemic.

“It was great to see so many people coming out to enjoy our parks…The new lighted walking paths would allow people to get out and exercise safely after dark or early in the morning,” said said Richardson.

The park is designed for multi-generational use, Richardson said, including active and passive space for all ages.

A multi-generational component of the park, a community garden, has already been operational for more than six months.

La Mesa Park and Recreation Foundation executive director Misty Thompson said all garden beds in the community garden are currently rented out and families growing food in the garden have all reported a harvest of successful fall.

“We received a grant to start a composting program through Community Composting for Green Spaces and the garden has a seed exchange which is a selection of seeds that gardeners can choose to plant in their garden,” said Thompson.

Different funding approaches were considered in the park’s master plan, such as El Cajon’s approach in 2008 which favored the use of sales taxes to fund general community services, including city parks, and the 2018 City of Tucson bond package. According to the proposed master plan, the city of La Mesa “is encouraged to continue bond or sales tax measures in future election cycles” to fund the overhaul of the Park.

“If you look at each of the three main features of the redesign,” Richardson said, “the costs are in line with other agencies building new stand-alone aquatic centers, community centers or new parks. The plan allows for a phased approach to work on the park so that features can be built as funding is received.

The final KTU&A draft master plan document and a resident survey are available at: cityoflamesa.us/1550/MacArthur-Park or residents can visit https://youtube/gP2ngkVrKig to view a recorded presentation of the draft plan and answer the survey directly afterwards.

Public comments are expected by January 30.