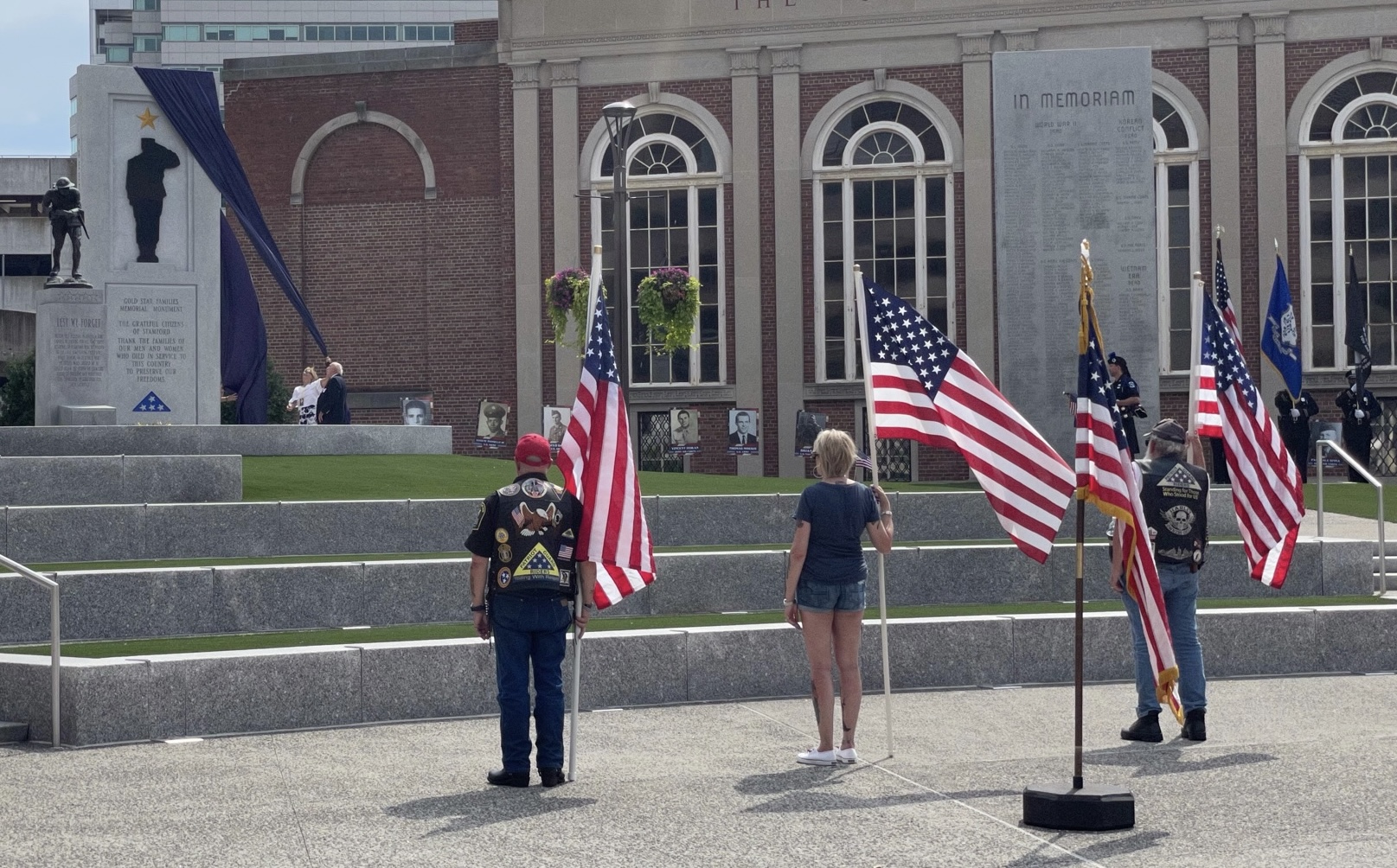 STAMFORD — When the name of his brother, a fallen soldier in World War II, was spoken from the podium, Frank DeMasi held his breath and covered his eyes with his hand.

DeMasi, 92, sat in a wheelchair with a picture of his big brother, Angelo, pinned to his chest. DeMasi was there to witness the unveiling of a monument at the newly rebuilt Veterans Memorial Park downtown.

But this is not a benchmark for veterans. It’s for their loved ones.

“Gold Star Families Memorial,” it read. “The grateful citizens of Stamford thank the families of our men and women who have died in the service of this country.”

It was clear at the ceremony that the losses of Gold Star families, no matter how long, come alive with the sound of a name.

“You can’t believe how much it means to hear it,” said DeMasi, who was a boy in the spring of 1944 when his family learned that Angelo had been killed fighting in Italy.

“You just wouldn’t believe how much it means,” DeMasi said.

Before the unveiling, the national anthem was sung by Leslie Manselle, whose older brother, Eugene Manselle, was killed in an ambush near Saigon in 1968.

Eugene Manselle, who used to sing for his siblings, is memorialized on a pillar with other Stamford residents who died in Vietnam. It is an honor now for the Manselle family to be recognized, said Leslie.

“He only had a little slice of life and then he continued to serve his country,” Manselle said of his brother, who left Stamford High School early to join the military and was killed. a month after his 21st birthday.

Gold Star families speak of their lost loved ones “as if they are still with us, as they are very much in our hearts and minds,” Leslie Manselle said. “We have so many stories to tell.”

That’s why the new monument is an integral part of Veterans Memorial Park, said Patricia Parry, who helped with the renovation that began a decade ago. Parry’s son, Navy SEAL Brian Bill, was killed in Afghanistan in 2011.

Military families sacrifice themselves even while their loved ones are alive, Parry said.

“No one serves alone,” she said. “The family serves with them. They’re not home for birthdays, holidays, and other important things. Families miss them all the time.

After they die, families fall apart, she said.

She told the story of US Marine James Branson, whose parents had just finished building a new home in Stamford in 1966 when they learned he had been killed in Vietnam.

“They never moved in,” Parry said. “They couldn’t do it.”

Parry sat on a park bench secured with a plaque honoring her son. She is a board member of the nonprofit Stamford Veterans Park Partnership, which has raised millions of dollars for park renovations through city funding, state grants, donations from businesses and individuals and for the sale of engraved paving stones installed along the paths. and plaques placed on poles, benches and lampposts.

“These families are hungry for someone to remember their loved one,” Parry said. “Say their name. Say it again and again.

“It’s so true,” said Tony Pavia, who along with his son, Matt Pavia, wrote two books about Stamford residents who served in the Nation Wars. The Pavias are the park’s historians. “Many cultures have a version of this saying.”

Bob Horan flew in from Boston to witness the unveiling. He was 4 years old when his older brother, Vincent Horan, was killed at Pearl Harbor on December 7, 1941.

It devastated his family, said Horan, now 80. He still can’t talk about it without calming down first.

He remembers a reporter interviewing his family days after his brother died, Horan said. Her two older sisters, who adored their big brother, were in tears.

“After he was killed, we received a letter in the mail that he wrote nine days before the attack on Pearl Harbor,” Horan said. “He said if he ever came home he would take mom and dad out for a nice dinner.”

Pavia said he learned from interviewing Gold Star families that they return very quickly the moment they hear the news, as if no time has passed.

Horan said he felt it was important to attend the unveiling in his family’s hometown, the only home Vincent knew.

During the ceremony, Vietnam veteran and longtime veterans advocate Jimmy Sparrow of Stamford read a poem he wrote about the need for buddies to remember their comrades. Sparrow wrote the poem after attending another unveiling – the 1982 dedication of the Vietnam Veterans Memorial in Washington, D.C.

Known as “The Wall”, it is two slabs of reflective black granite engraved with the names of some 58,000 Americans killed in Vietnam.

In his poem, “Names”, Sparrow recounts how he was one of more than 100 people chosen to read about 500 names each on the altar of the National Cathedral:

The first was Kosakowski, Gerald A.

The last was Lahna, Gary W.

I read a name and get a reaction

The memory eye of the mind

Who they were from

And who they could have been…”