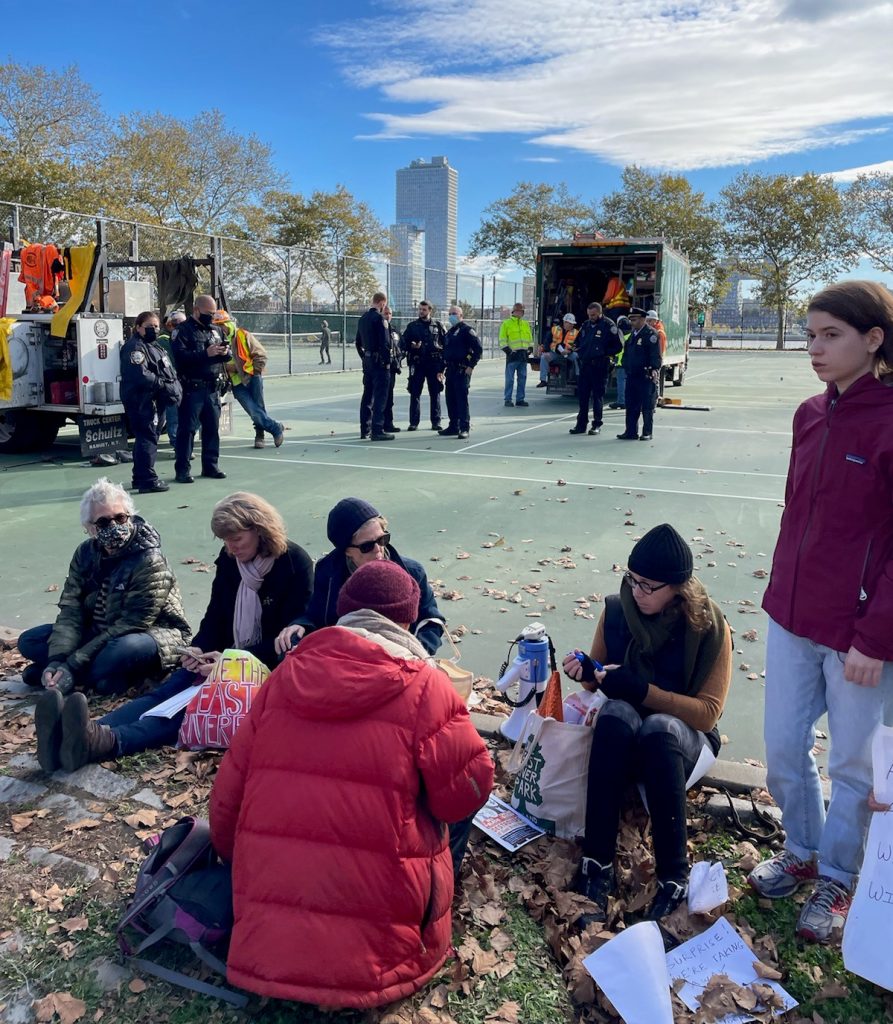 BY THE VILLAGE SUN | East River Park activists are putting their bodies in desperate danger in hopes of blocking the destruction of their beloved park.

On Monday morning, a day before Election Day and the first official day of “work operations” for the East Side Coastal Resiliency project, a group of park lovers gathered at the park’s amphitheater at sunrise. .

They quickly converged on the tennis courts just north of the Williamsburg Bridge. It’s one of the first places in the park that Blasio’s administration has said it will dig for the multi-year $ 1.3 billion project.

At around 10:15 am, police began threatening to arrest the activists as they sat on the courts as a sign of civil disobedience holding protest signs.

Among the protesters was Allie Ryan, a city council candidate in the general election on Tuesday, November 2, as a candidate for the Neighborhood Party, a third line she created to run as an independent. Incumbent Carlina Rivera won the Democratic Party primary in June.

Ryan, who says she isn’t hooked on party labels and is primarily an environmentalist, has made saving East River Park the central platform of her campaign.

Rivera and the mayor de Blasio, on the other hand, are strong supporters of the so-called “raised park” plan, which would take at least five years to complete and put about half of the park out of public access at any one time. . Activists warn that – knowing the city – the project would likely last much longer than five years.

Council member Rivera says ESCR is essential to protect the surrounding community from another flood similar to Sandy’s.

But Ryan and the protesters say a much less extreme and destructive plan, the so-called ‘Berms Plan’ – which wouldn’t cut down the park’s nearly 1,000 mature trees – would work, and they’re upset that the city supports the current regime.

Arthur Schwartz, the lawyer representing plaintiffs in a community lawsuit aimed at blocking the coastal resilience project, said the city was vague on the start dates for work in the park. An ESCR community notice published on October 20 indicates that on November 1, “closures in the park and pedestrian detours” will begin, in preparation for demolition work. Schwartz said the city has indicated it wants to start digging the tennis courts later this month. Activists say it could be in three weeks.