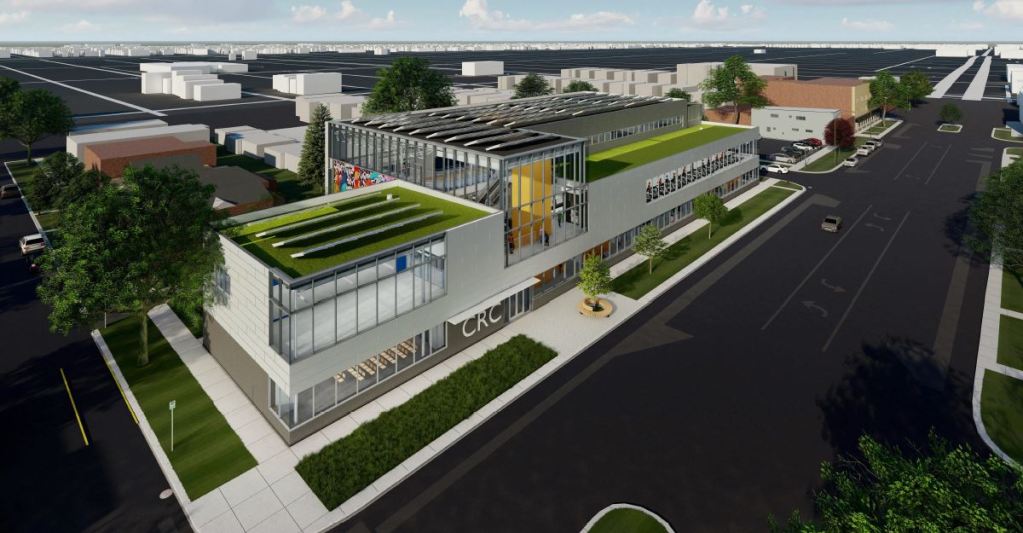 Building bridges through the construction of the Recreation Center

With a groundbreaking ceremony scheduled for March 19 for the new Community Recreation Center (CRC), the Park District of Oak Park (PDOP) is about to begin construction of the new facility. Evolving from a 2016 feasibility study commissioned to explore the desires of Oak Park residents to have a common recreation space for the Village of Oak Park, this new building will provide recreation programs for citizens of all horizons.

When complete, according to the district, “the facility will include gymnasiums, a fitness center, community and multipurpose rooms, mental health services, and more.” Additionally, by staying true to a principled vision of what we want our community to be, funders and village administrators want people to know that the envisioned center will be a place of inclusion, equity and “a place of belonging”.

The Oak Park AMENS Mentoring Group has long understood the need for such a facility. For approximately 25 years now, AMENS has worked with marginalized youth and families to ensure they receive an equal share of education, mental health and recreation services available to all citizens of Oak Park. Deacon Wiley Samuels Jr. of Fellowship Christian Church and Fellowship Community Services Inc., a founding member of AMENS, encouraged band members George Bailey, Lee Pulliam and Carl Spight to talk with PDOP Executive Director Jan Arnold about our concerns about the CRC’s role in meeting the needs of the youth and families we serve. Our initial discussions focused on programming and accessibility issues.

Finally, we asked for clarification on equity issues related to the construction of the facility. Equity issues emerged alongside the programmatic inquiries we had discussed for the proposed center. As we expanded our discussion, issues with contracts and vendors surfaced, presenting embedded fairness issues that we brought to Jan’s attention.

We put programming issues aside and started discussing who the vendors might be. Who would get contracts, and what percentage of Women Business Enterprises (WBE) and Minority Business Enterprises (MBE) sub-contractors would be represented in the CRC construction workforce? At the time of our conversation, the WBE and MBE participation rate for the CRC project was 15%. We questioned this participation rate. We wanted to know what the rate meant in terms of the number of women and black and brown people who would work under hard hats at the site. These were new and often difficult conversations to have, but we had them – always respectfully and productively.

During our many discussions about the presence and goals of such a facility in our community, we realized that a meaningful relationship between our group and PDOP was forming. We have come to see ourselves as partners in a discourse aimed at improving the quality of life in our community. We appreciate Jan’s responsiveness and attention to our concerns.

We were very pleased when she informed us that after consulting with her team and reviewing the details, they believe the MBE/WBE attendance target could be increased from 15% to a minimum of 25%. Later still, through an official press release, she informed the entire Oak Park community that the turnout had risen to 29%.

“Building relationships cannot be taken for granted.” This charged and activated phrase, which Deacon Wiley often employs, is a solid and helpful compass, a way to get things done in these times. We believe our growing relationship with Jan Arnold and his team has moved this discussion forward. The history of such discussions in the United States is well known. The increased WBE/MBE turnout may well mean that some of the employees building our CRC could start saving for a house, buy a car, or set aside money for their children’s education.

Finally, we would like to take this opportunity to ask those who are considering contracting new construction, to familiarize themselves with your current participation rates, especially officials related to village tax districts, who may be involved in new construction. Since we’ve been living in Oak Park, words like inclusion, equity, and belonging have been spoken to promote real and imagined ideals and societal change. The construction of the CRC in Oak Park has the potential to turn such abstract words into concrete actions.

No Swimming or Toilets at Kelowna’s Newest Waterfront Park | News